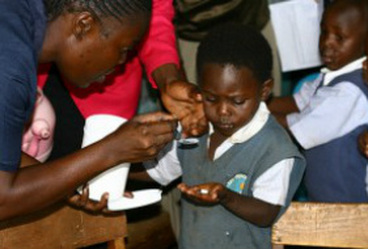 Around the world, hundreds of millions of people are infected with parasitic diseases which can be cured with extremely cheap drugs. Deworming charities distribute these drugs, at a cost of around 50 US cents per person. Because this treatment is cheap and safe, they can administer these drugs to everyone in an affected community without first needing to diagnose them. This makes them extraordinarily cost-effective.

Deworming treats many different diseases at once, including soil-transmitted helminths, trachoma, and the hard-to-pronounce schistosomiasis. Many of these diseases involve intestinal worms, which are just as unpleasant and harmful as they sound. They can exact a significant toll on people's lives, causing organ damage, anaemia and blindness. So the ability to cure them so cheaply is a fantastic giving opportunity.
​
We recommend two nonprofits that carry out deworming, Deworm the World and the Schistosomiasis Control Initiative. Both are among the handful of top charities recommended by leading evaluator GiveWell.

Why deworming charities are so effective

As explained above, the parasitic diseases treated by deworming are extremely widespread, yet can be treated for as little as 50 US cents. This has led to deworming being described as “the best buy in global health”.[1] The drugs used are often donated by their manufacturers, are easy to store and distribute, and only need to be given once a year. The safe mass administration approach used by charities working in this area is also extremely cheap, as described above.

In addition to their significant health benefits, some studies have suggested that deworming also leads to treated kids attending school for an extra year for every US$7.19 spent, because the diseases that it cures exact a heavy toll on school attendance and cognitive performance.[2]One study found that deworming led to a 25% reduction in school absenteeism, although this is a difficult effect to pin down; for more details, see GiveWell’s in-depth report.[3]

To find out more, you may be interested in watching this moving video from one of the charities that we recommend:

What are the best charities doing deworming?

Deworm the World works with health ministries in both India and various African countries to launch school-based deworming programs. It helps them with planning and the training of teachers to distribute the treatments. It has been recommended by leading charity evaluator GiveWell, and described as a “best buy” in global health listed by the Jameel Poverty Action Lab at MIT. They can treat children for well under a dollar, and have a funding gap of several million.[4]

The Schistosomiasis Control Initiative also works on deworming. It distributes drugs (procured from the World Health Organisation) in sub-Saharan Africa, to treat both schistosomiasis and other parasitic diseases. It can also treat people for under a dollar, and has been recommended by GiveWell just like Deworm the World.
​
For more in-depth explanations of why these charities are so outstanding, we recommend the in-depth reviews of them by GiveWell. Those who want to dig deep may also be interested in GiveWell’s detailed examination of the academic literature on deworming.